Episode 16: Julian Franke on Perception and Imagination of Architecture

In our podcast, we have spoken to many architects who gave a deep insight into making architecture. We also started looking into the other activities that help to get the architects’ message around, from photographers and critics to PR.

But there is still the elephant in the room: what about the perception and imagination of architecture. That is a crucial question if architecture isn’t meant to be done for its own sake but wants to fulfill its social function. Happily, some architects are looking into these aspects. One of them is our guest today, the German architect and philosopher Julian Franke.

Julian, born in 1991, lives and works in Zurich and Berlin and deals with topics at the interface between philosophy of architecture, semiotics, image theory, and aesthetics. After his bachelor in architecture in Münster he studied philosophy at TU Berlin. He also got his Master in architecture at TU Berlin and worked under Prof. Ralf Pasel as a tutor for the department of construction and design. Since 2020 he is a project architect and urban planner for KCAP Architects+Planners in Zurich.
Some weeks ago, he published his book „Erfahrungswelten. Wahrnehmung und Imagination der Architektur“, that is Worlds of Experience. Perception and Imagination of Architecture in the series “ArchitekurDenken” (ArchitectureThinking) for the German publisher transcript Verlag.

A book that not only describes perceptions of concrete, architectural situations - it evolves around a walk in the street Unter den Linden in the centre of Berlin - but also deals with architecture and architectural perception in a philosophically reflective manner. All that taking into account the perception of the everyday users, making clear “that it is not only the designing architect who shapes the built environment but that each recipient designs the world for themselves in their way.“ A statement that I love and where we get more insights during our talk with Julian.
Julian explains how in our perception of the city, the most diverse fantasies and desires, conscious and unconscious, projections and retentions merge again and again kaleidoscopically into ever new constellations. The spectator should be considered as the creator of their reality. That is an act that goes beyond what can be perceived by the senses.

Julian Franke points out that the experience of architecture consists of a variety of imaginary worlds. The description of those worlds also involves a new interconnection of the divisions between the traditional fields of semiotics, phenomenology, and anthropology. Architecture thus becomes a laboratory of perception and theory. During our talk Julian refers to promenadology, and also topic of the temporality of architecture. Because architecture is often too much about space, the built space and the built material, but we shouldn’t forget of how dependent architecture is on time. Through past events, past experiences of the recipients, traces of the past, present perception, present influences, potential for the future, imagination of the past and future we make our own narrative of the world we live in. 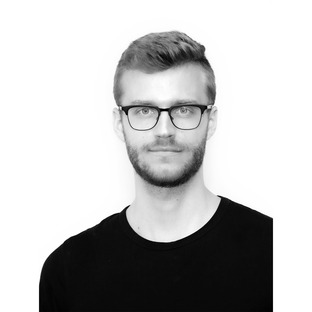