Grimshaw Architects is a worldwide known firm, founded in 1980 by Sir Nicholas Grimshaw, an architect who has dedicated his entire career with unchanged coherence to innovation and sustainability, receiving perhaps one of the highest number of recognitions. Guest of our podcast as representative of the practice is Andrew Whalley, part of the company since its earliest days, since 1986, Deputy Chairman in 2011 and succeeded Sir Nicholas Grimshaw in 2019 as Chairman of the global leadership structure, actually embracing offices in Los Angeles, New York, London, Paris, Dubai, Melbourne, and Sydney. Involved in a wide range of award-winning projects, including education, performing arts, transportation and workplace, he talks with us about his interesting experience alongside the passionate and pioneering character of his principal, sharing some of their most famous milestone works.
The spectacular Eden Project in Cornwall and the singular story leading to its realisation, the intervention of the Fulton Center transit hub in Low Manhattan, N.Y, become an authentic catalyst for development and growth, exemplary conjugating city’s history with innovation,Via Verde, a social, affordable housing scheme in the South Bronx that many years in advance has proposed sense of community and social well-being until the recent intelligent, net zero carbon sophisticated Pavilion for the Expo Dubai 2021, represent some pleasant moments of the conversation. Cross-disciplinary collaborations, the meaningful long-lasting modernity of even old projects, nature as inspiration and beauty above essentiality and functionality of an attentive sustainable holistic approach are part of the topics deepened in the course of the podcast. 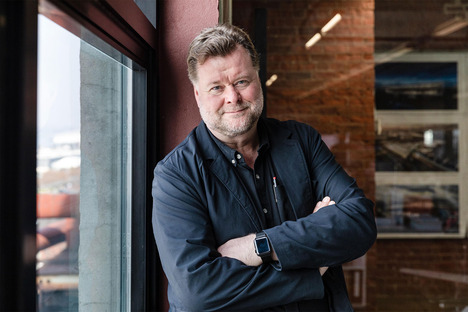